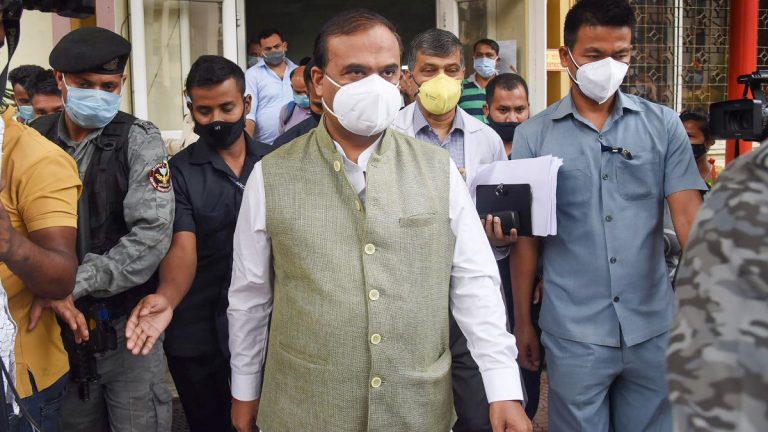 From visiting Covid patients at 2:30 am to giving deadlines for Dispur flyover, Himanta Biswa Sarma has hit the ground running as CM.

ndia’s democracy has thrown up many leaders but rarely a chief minister who has worked their way up from the bottom of the political hierarchy. Himanta Biswa Sarma was not parachuted into the CM’s chair in Assam – he brings with him a two-decade-long journey from grassroots to governance.

His immediate challenge is, of course, containing the spread of the coronavirus, and Chief Minister Sarma has hit the ground running after taking his oath last week.

He visited a hospital at 2:30 am to check how critical Covid patients were being taken care of at ‘odd hours’. He told PWD officials to complete the Dispur supermarket flyover by 30 September. He met the consulate general of the Bhutanese Consulate about Assam-Bhutan ties, increasing trade volume and building roads. He also visited the grenade blast site near Digboi, after an alleged attack by ULFA insurgents, and talked to family members of victims.

All this just over the weekend.

Himanta Biswa Sarma is far ahead of many of his contemporaries – he knows the importance of healthcare, connectivity and long-term planning.

Building a health base

When it comes to Covid, Sarma has an early mover advantage. Before he became the chief minister, he had already begun building the base of a sturdy health framework in Assam. During his former stints as health minister (with both Congress and BJP governments), he started an initiative of extra investment in healthcare infrastructure and delivery in Assam. This project has been continuing for 10 years and has focused on:

–       Affordable and available healthcare systems at all levels—primary, secondary and tertiary—and the implementation of a universal healthcare programme that includes free insurance for all.

–        Capacity building with three new medical colleges – four more are on the way – and compulsory posting of graduating doctors and nurses in rural Assam.

–       Building value chains for healthcare and medical tourism, leading to the creation of a health economy ecosystem.

Sarma believes in the adage “a healthy nation is a prosperous nation”. His efficient handling of the first wave of Covid shows he can handle the second as well. As CM, he has already held meetings with deputy commissioners and police superintendents to take stock of the situation and asked them to visit hospitals regularly. Assam has commissioned 14 PSA oxygen units.

The new chief minister has declared that his top priority now is to contain Covid “in the next 15 days”.

When taking his oath as chief minister, Himanta Biswa Sarma pledged to take Assam to “greater heights of prosperity”.

In addressing Assam’s economy and employment needs, the CM needs to take advantage of the state’s rural and farming communities blessed with natural assets. Economic development doesn’t need to come at the cost of the environment — this is the decade of Naturenomics. Assam’s model should reflect that.

Short-term financial support should be in the form of interest waivers, deferral of loan repayment, and 80 per cent subsidy on built infrastructure for tourism, education and other services including retail. This will help keep the current employment levels stable. The chief minister has already started this process by implementing a plan to provide 1 lakh jobs and waive micro-finance loans.

Infusion of long-term infrastructural capital with a target to create 10 lakh additional entrepreneurial employment and jobs in five years will also go a long way and help Assam become a leading state.

One of the reasons the BJP won in Assam was its infrastructure push – and Sarma was at the centre of it. Last year, he had announced projects worth Rs 12,000 crore. This year, he has already started work on it – note that Sarma has retained the PWD portfolio for himself in his new cabinet.

Roads and riverways have massive potential in Assam.

The Brahmaputra and Barak river systems should be fully harnessed through dredging and developing navigation channels, ports, and shipyards. Further, Assam can create sustainable townships along these rivers that can become the hub for rural goods and services marketing. A Brahmaputra optimisation plan, including flood management, recanalisation of tributaries to aquifers and addressing the groundwater challenge of fluoride and arsenic, should be taken up on priority basis.

It is absolutely critical that we capitalise on the market opportunity provided by Bangladesh through the river system. This will also help bring cheaper goods and services into the northeast with Assam as the hub.

Apart from building and upgrading roads, development of surface infrastructure should include the creation of at least 20 world-class wayside amenities along national and state highways. Each wayside amenity can provide linkages for rural supply and demand, IT hubs, tourism amenities, logistics, and natural resource management, with a cluster of villages having investment and ownership of these.

Historically, Assam has been a melting pot of Indo-Tibetan cultures – this is a distinct advantage the state has when it comes to connecting with neighbouring countries. Sarma’s meeting with Bhutanese officials after he became CM shows its importance.

Assam and other northeastern states should together evolve a strategic plan for integrated northeast tourism circuits, and promote ecological tourism.

Chief ministers like Himanta Biswa Sarma who have risen from the grassroots know the importance of long-term planning. Climate change is staring at India, and states with ample natural resources are particularly vulnerable.

The Covid pandemic has reinforced the case for sustainable use of natural assets. Forest cover is the most important natural asset for Assam. The value of nature should be the fulcrum of economic development in Assam. Rewilding Assam is important and can be done through intelligent agricultural practices that ensures food security.

To address climate change, the state should develop and adopt technologies to address the issue of floods and rising emissions. Assam should be the first state in India to declare a net zero target by 2030.

Assam accounts for more than 50 per cent of India’s tea production, which directly or indirectly creates employment for 10-15 per cent of its population. Therefore, a strategic vision for tea production involving integration of large tea estates with small tea growers needs to be evolved. The tea industry should be given agriculture status and all benefits available to rural areas should be made available to tea estates.

Himanta Biswa Sarma is a son of the soil who became chief minister. If anyone can make Assam a leading state in India – with better connectivity, jobs, and ties with neighbours – it is him.